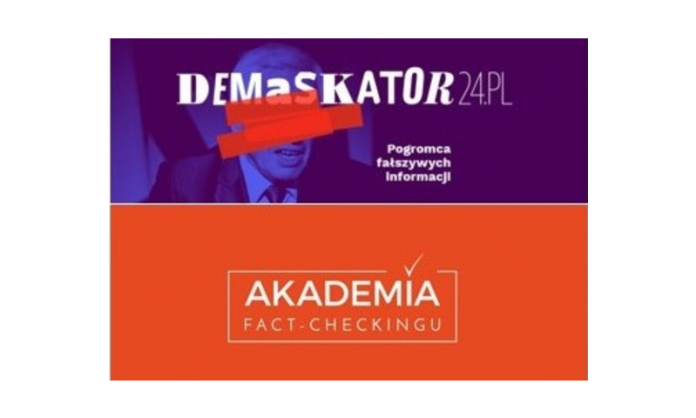 Facebook’s recent announcement that it had entered into a partnership with Agence France Presse (AFP) as its third-party fact-checker in Poland may have led some media-watchers to assume that there are as yet no reliable Polish fact-checking initiatives. This announcement no doubt reinforced the impression created by a Facebook representative’s earlier remark that the social networking giant had not managed to find a suitable fact-checking platform in Poland with which to form a partnership. However, these statements do not give the whole picture, as there are actually a number of fact-checking projects in operation in the country.

It is true that the Polish fact-checking scene is still relatively young: most of the currently active fact-checking platforms were launched within the last 12 months. Duke University’s Reporters’ Lab lists only two Polish fact-checking sites on its list of global fact-checkers: Demagog and OKO.press. But several other Polish platforms have been launched recently which do not yet feature in the Reporters’ Lab database. Konkret24 and Demaskator24 both began to operate last autumn and Antyfake became active this spring.

The Demagog platform, which is run by the NGO with the same name, is the most well-established and developed Polish fact-checking initiative. The Demagog team has been verifying statements made by politicians – including their pre-electoral promises – since 2014.

In addition to this activity, Demagog also runs its own Fact-checking Academy, which provides media literacy sessions that explain what fact-checking is and how it can feed into public debate and inform the public sphere. The main target groups are secondary school pupils and students at higher education establishments. Demagog experts teach the students how to verify facts and gain a better understanding of the news.

For the anti-government investigative journalism website OKO.press, fact-checking is just one of its many activities. Founded in 2016, OKO.press subjects statements made by Polish politicians, public servants, religious authorities and other opinion leaders to critical scrutiny and publishes its findings on a section of the website entitled “Prawda czy fałsz” (“True or false”).

The more recently launched platforms Konkret24 and Demaskator24 differ from Demagog and OKO.press in that they are both part of big mainstream media organisations – the TVN group (which owns many TV channels, including one of the two biggest private TV channels in the country) and Polska Press (which owns the majority of Polish regional newspapers). Both platforms verify information from various sources – mainly from politicians, legacy media and social media. Both Konkret24 and Demaskator24 have also received funding from Google’s Digital News Initiative.

The newest fact-checking initiative in Poland, Antyfake, came about as the result of a TVN investigation into the Polish fake news industry. A team of TVN journalists probed the activities of a website, newsweb.pl, which was engaged in the production of clickbait stories and fake news that was widely distributed via social media. Newsweb.pl – later renamed raportdnia.pl – was part of the media group HGA Media.

Following TVN’s revelations, HGA Media owner Albert Wójcik shut down the site and announced that he planned to set up his own fact-checking website with the aim of promoting high-quality and trustworthy online news in Poland. His remarks were met with some scepticism, but Wojcik remained true to his word and in April this year Antyfake was launched. The jury is still out on how significant a contribution it is likely to make to the Polish fact-checking scene.

The case of Antyfake highlights something that is an issue not only in Poland, but also affects similar initiatives elsewhere. Many fact-checking initiatives are seen as not having a sufficiently watertight methodology. It is often observed that the techniques of fact-checkers (especially with regard to the transparency of their methodology) leave something to be desired, and occasionally raise serious concerns.

This is certainly true of some Polish fact-checking platforms, as many of them are still feeling their way. The more experienced ones, such as Demagog and OKO.press, clearly set out their verification procedures. Others fail to provide such essential information.

The role of research

Given that fact-checking platforms throughout the world have recently undergone a period of dynamic growth, it is safe to assume that the infrastructure for combating disinformation in Poland will also develop over time.

One thing that would help is for more academic research to be carried out in this field, complementing the efforts of NGOs (as in the case of Demagog and OKO.press) and commercial media organisations (Konkret24, Demaskator24, Antyfake).

Image: Created from images posted on the Facebook pages of the fact-checkers Demaskator24 and Demagog.