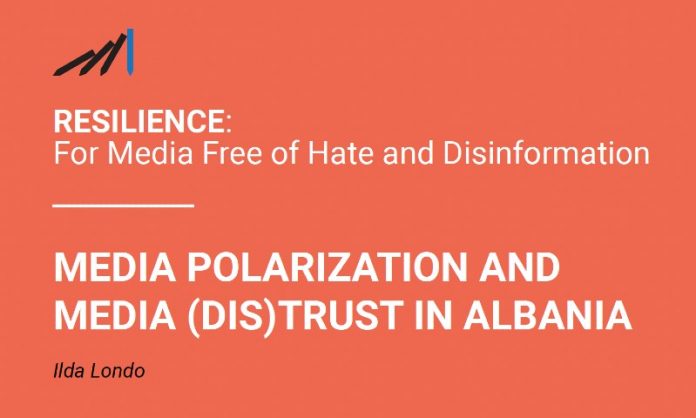 Complementing research on hate and propaganda models of media and communication and hate narratives conducted earlier as part of SEENPM’s Resilience project, this report analyses media trust and media gender issues in Albania and offers a set of policy recommendations.

The study makes the following conclusions:

The opinion poll and the discussion with journalists provided interesting insights into the current public perception of media trust and the factors that contribute to such trust, as well as to the overall understanding of the public of media issues. The poll confirmed the dominance of television as the main source of information on a daily basis, as well as the most trusted source of information, especially for age groups above 45. The increased use of online media and especially social networks both in terms of frequency and as a source of information is another visible trend, reflecting the overall widespread use of social networks in the country. The proportion of people who tend to trust the media was only slightly higher than those who do not trust it, which should be a warning bell for the media community. At the same time, the public also believe that media independence is poor and that they tend to spread disinformation and hatred, probably even more than social networks.

The focus group discussion with journalists was an opportunity to probe the problems with their own profession, but also a way to face the public trust in them. In general, the journalists believed that the public trust in their work more or less coincides with their own perception of the situation, but the poll also revealed some findings that were paradoxes hard to explain. One of the main explanations for such discrepancies that came out of the poll was the lack of the due critical skills on media conduct related to increased propaganda effects and absence of media literacy policies for the public.

Journalists described that the current public perception of media trust was an effect of both internal faults within the media community and increased negativity in public communication on journalists, coming mainly from political sphere. The role of social networks and online media in opening the gates to floods of unethical comments and hate speech was also a factor that cannot be ignored, which has in a way legalized the right to verbally assault the media and journalists in all kinds of manners. The poor response in terms of self-regulation from the media, combined with unethical conduct from media itself, has not helped to ease this problem that contributes significantly to lowering of trust in the media among citizens. Lack of solidarity among media professionals was also a major source of self-criticism, along with the failure to react even minimally against propaganda efforts vis-a-vis the media.

This publication was produced within Resilience: Civil Society for Media Free of Hate and Disinformation, a regional project financially supported by the European Union and implemented in the Western Balkans and Turkey by a consortium of media development organizations led by SEENPM. It is part of a series of publications on media trust and gender issues based on research conducted in Albania, Bosnia and Herzegovina, Kosovo, Montenegro, North Macedonia, Serbia and Turkey (all publications are available on the SEENPM website).

Read the previous reports on Albania:

Hate Narratives and Disinformation in Online Media in Albania