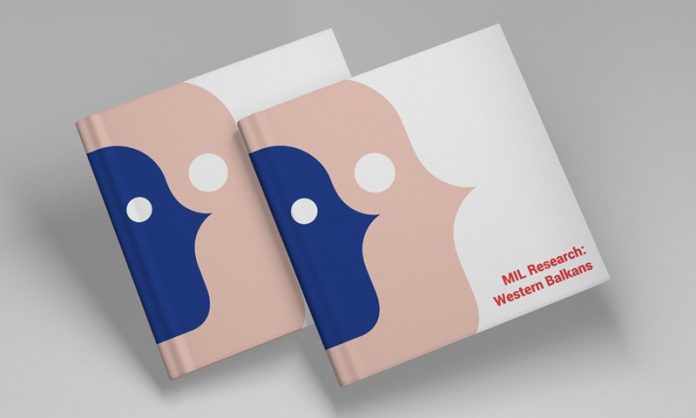 Major research by SEENPM member organisations finds that countries of the region lack comprehensive policies and institutional framework for developing MIL in a systematic way and at scale.

Our regional research, intended for mapping and better understanding of the situation and development of media and information literacy in Albania, Bosnia and Herzegovina, Montenegro, North Macedonia and Serbia, was conducted in 2018 by researchers from SEENPM member organisations, the Albanian Media Institute, the Mediacentar Sarajevo, the Macedonian Institute for Media, the Montenegro Media Institute and the Novi Sad School of Journalism, under regional coordination of the Peace Institute in Ljubljana.

The context was provided by frequent references to media and information literacy in many current documents of European institutions and organisations suggesting MIL as an answer to various accumulated problems and shortcomings of media policies and practices.

International organisations have shaped the conceptual framework, activities and strategic approach to media and information literacy in our region. They work with governments and NGOs, encouraging transfer of knowledge and often also acting as donors for MIL activities. The negotiations and preparations for EU membership set the political framework and influence the way media literacy is dealt with in the countries of the region.

Despite this framework, no country in the region has comprehensive policies and institutional framework for developing MIL in a systematic way and at scale. Clearly, MIL is being left on the margins as a toy for civil society, public sector enthusiasts and international organisations.

MIL is not explicitly or continuously included as a goal in policy documents, public policies or legislation. Some aspects of MIL are referred to in strategic documents and legislative acts concerning the media, information society and education.

Our research has shown that electronic media regulators, such as the regulatory agencies in North Macedonia, Bosnia and Herzegovina, Montenegro, and partly also in Albania, can play an important role in the analysis and promotion of MIL as well as coordination of different stakeholders with a view to fostering comprehensive and harmonised actions in this field.

Civil society organisations in the region have long recognised the strategic role the education system can play in bringing about comprehensive, long-term and mass development of MIL. In 2010 and 2011, the Macedonian Media Institute and the Albanian Media Institute established cooperation with state authorities responsible for the education system, encouraging them to introduce media literacy as a subject or media literacy content in schools. The process included curricula development, teacher trainings (in North Macedonia, around 1,000 teachers were trained), and preparation of textbooks. Unfortunately, such initiatives did not get enough political support to grow into permanent schemes.

Almost a decade later, media literacy has not yet been introduced as a subject in schools in these two countries, though some MIL aspects do feature here and there across other subjects. In the same time, subjects aimed at strengthening ICT technical skills have been incorporated in the curricula, though schools are often underequipped and teachers undertrained.

In Montenegro in 2008 media literacy was introduced as a one-year elective subject in the second or third grade of grammar school curriculum. In Serbia an elective subject named Language, Media and Culture was introduced in grammar schools from the 2018-9 school year. Yet, our empirical research in Serbia and Montenegro (consisting of interviews, focus groups and student and teacher polls) suggests that a mere introduction of a subject is not sufficient. Good and continuous teacher training, good textbooks, access to equipment and teaching aids are essential. In Montenegro, the number of students attending media literacy classes dropped by half over a decade. Of the 20 grammar schools in the country, 11 have introduced the subject, but in the school year 2016-7 it was taught in only six schools, with a total of 164 students attending classes, while in the following school year numbers dropped further, with only four teaching the subject and 60 students attending.

The question remains as to why, even when an agreement is reached to introduce a subject aimed at developing media and information literacy, education authorities opt for an elective subject and then limit it to grammar schools.

Civil society organisations are pioneers of MIL promotion and development in the region. These organisations were active in raising the awareness and ability of citizens, notably youth, to critically examine and get involved in the work of the media and digital platforms even in times when the concept of media and information literacy was not as well-elaborated as today. A catalogue of all the civil society organisations in the region and the media and information literacy actions carried out by them would be extensive, as our mapping of leading stakeholders and initiatives shows. But the large number of civil society actors has not brought major advances: they appear scattered, their actions mostly short-term; and they are typically dependent on foreign donations.

The media are not a particularly active player in the promotion of media and information literacy in the Western Balkans. Public broadcasters are doing almost nothing to promote MIL, even though working to empower and educate citizens should be central to their mission. The non-participation of media and journalists in the region in strategic measures and activities aimed at improving citizens’ media and information literacy is a historic failure on their part. The narrow focus of their attention and energy on fending off attacks on their independence and dignity is understandable, but their non-participation in activities to improve citizens’ media literacy means they have not recognised the opportunity to reconnect with citizens and invest in their empowerment as active and critical guardians of freedom of expression and democracy in general.

In our view, it should be an imperative to design mechanisms for the continuous training and professional development of journalists and other media professionals to improve their own media and information literacy given the challenges resulting from new technologies and complex structures for organised spreading of false information, developments that threaten the survival and critical role of journalism.

THE POWER OF NETWORKING AND COLLABORATION

The fairly large number of actors working to improve media and information literacy and the advances that some governments in the region have made toward adopting a national strategy for MIL still amount to only sporadic steps with an uncertain outcome. At the same time, there are many proofs of the exceptional benefit that can be derived from networking and collaborative activities, especially when strategic work and joint actions are undertaken in cooperation with state bodies, civil society, but also other players, including the media. Our regional project “Media for Citizens – Citizens for Media” recognises the potential and momentum for putting media and information literacy higher on the political agenda by mobilising and connecting different actors in national coalitions and joint actions.

The main purpose of our research was to map the field of analysis. We have shown that some good practices and good attempts to translate an idea into a concrete public policy can be found in each country. Fragmented attempts, mostly by individual activists and CSOs, should be turned into a coherent public policy with clear objectives, stakeholders and performance indicators.

Media and information literacy is not a magic wand that will resolve all the accumulated problems in the media sphere. But it is an important step on the long road of transforming the system and making citizens’ information and communication needs an imperative for an active state policy in the public interest. Definition of priorities, creation of broad alliances for a reform of the media system (at both national and supranational levels) and an active defence of the right to credible information should make up the political framework for such changes.

The flood of disinformation; negation of facts and science; hate speech; sale of privacy; disappearance of serious political debate regarding the past, present or future; populism, which offers quick solutions to complex problems; the lack of trust in political institutions; these are all results of the destruction of democracy that has been going on for a long time now. The worst that can happen is for media and information literacy to become a sort of Trojan horse of liberal policy that relativizes the rights of people by reducing them to the possibility to choose between different identity forms of media consumption. In this relativist view, critical understanding of, and a media-literate attitude vis-à-vis, the media and media content is but one possibility we choose as citizens. And what is the other possible choice? Media illiteracy and being doomed to non-critical acceptance of media manipulations? Can we allow this to be a matter of choice?

Download the country publications in local languages (all contained in the regional publication in English):

Montenegro: Iskustva i perspektive medijske i informacione pismenosti u obrazovnom sistemu Crne Gore (Media and Information Literacy in the Education System of Montenegro: Experiences and Prospects)

Serbia: Iskustva i nove mogućnosti za implementaciju medijske i informacione pismenosti u osnovne i srednje škole u Srbiji (Experiences and New Opportunities in Implementing Media and Information Literacy in Primary and Secondary Schools in Serbia)

The publication featured in the article and the article were produced within the regional program “Media for Citizens – Citizens for Media: Strengthening the Capacity of NGOs for the Development of Media and Information Literacy in the Western Balkans” , implemented with the support of the European Union by partner organizations Mediacentar Sarajevo, Albanian Media Institute, Macedonian Institute for Media, Montenegrin Media Institute, Novi Sad School of Journalism, Peace Institute, SEENPM.