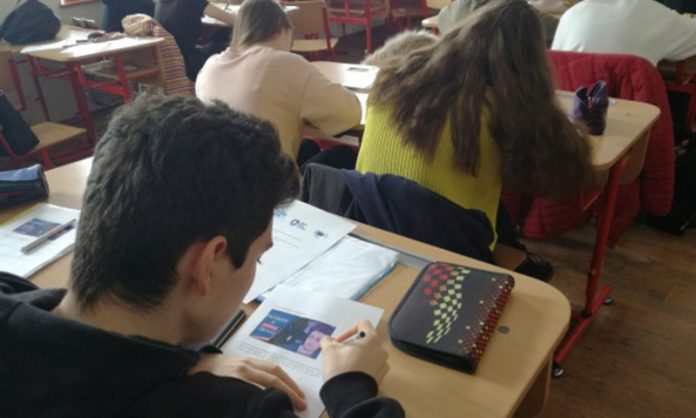 Engaging 9th grade students in active participation was one of the main challenges I took on in teaching six classes on media and contemporary propaganda at one of the top high-schools in Bucharest. The Romanian secondary education is still marked by teacher-centered methods and student passivity and negativity, but using the Mind over Media (MoM) interactive methods in analyzing images and videos from our present-day media was a breath of fresh air. According to the feedback received from the 28 students I worked with, the classes were perceived in very positive terms: they “really enjoyed the course”, had “fun”, were “glad” and “captivated” and considered the contents “useful”.

Situating Mind over Media in EU

The classes took place within the English as Second Language (ESL) subject. This choice was based on the match between the general and specific competencies aimed for by the ESL curriculum and MoM’s media literacy approach in analyzing contemporary propaganda. Given the lack of media education in our core high-school curricula, ESL’s focus on communication forms and messages in diverse current social settings provided a path of least resistance to include media propaganda in formal education without overburdening teachers and students.

The local aims of the six-hour module were, in addition to MoM’s learning outcomes, to create a ‘situated learning’ context where students could engage in dialogue in order to improve both language skills and their critical thinking in analyzing the persuasive messages they receive from traditional and new media. The lesson plans were based on the original MoM curriculum, using both local and high-profile international cases such as the 2016 elections in US and Brexitcampaigns, discussed in the Romanian public sphere and relevant for ESL learning contexts. Basic media concepts were also introduced in order to provide a better media roadmap, including editorial and commercial content, the relationship between the media industry and advertising and the evolution of these in social media.

How Students were Involved in Adapting MoM Curricula to Local Context

Students were initially given a questionnaire in which they were asked to briefly give their opinions a few subject matters of public interest in Romania: communism, the ruling and opposition party of their choice, one minority group, civil society, vaccination safety and the Roșia Montană mining project. Considering that students had little knowledge on ruling and opposition parties, minority groups and civil society, but were more familiar with vaccination safety and the Roșia Montană project, I have chosen the latter as local case studies for contemporary propaganda. The purpose of this activity was to build upon students’ own interests, previous learning and knowledge on major topics targeted by local propaganda practices, taking into consideration time constraints and the primary focus of the module on media concepts and propaganda.

Most students participated in discussions, engaged and animated by the variety of examples, which included corporate, activist and electoral videos, posters, banners and memes across various platforms. The most challenging and interactive activities were group work and role-playing situations in which students were asked to provide pro and con arguments on the local public cases, taking on the role of various social actors or stakeholders. Although some students felt uncomfortable with defending a stance they personally didn’t support, they found the exercises interesting and useful for understanding other people’s interests and experiences.

Each group was then asked to identify the audiences which needed persuasion by one group or another. Students were then gradually shown the techniques used in propaganda images and videos to persuade such audiences. They easily noticed the emotional and manipulative effects of propaganda techniques, compared to the construction of their own reasoned and evidence-based arguments, regardless of the stance towards a particular subject matter.

The aim to cultivate active participation concerned both students’ roles in their learning process and their role as active media audiences: from our first meeting, students’ attitude towards media was downright skeptical and distrusting, thus becoming aware of propagandistic practices in so many fields was only deepening their distrust in the media system as a whole.

To address this, I used the recent Cambridge Analytica investigation to discuss agency and empowerment. The possibilities to ask media literacy critical questions, to look for reliable information from multiple sources, to question media practices privately or publicly, to make use of the current possibilities to write back, to signal wrongdoings and create better media ecosystems have left students more optimistic about their future as media users.

Aside from being able to recognize and justify the reasons for which an image is propaganda, students understood the essential role played by self-reflexivity and highlighted the importance of context in evaluating propaganda messages: in the final questionnaire asking them to evaluate at first sight an image about Facebook, all of them offered supporting arguments derived from definitions and techniques in stating whether the image is propaganda or not. Most of them considered it an example of beneficial propaganda, few considered it harmful. However, they mentioned that more production context and reliable information on the subject matter were needed in order to properly assess the image impact and form an opinion. Going beyond propaganda and looking for credible information is a great step forward in navigating the media landscape.

Originally written for Mind over Media in EU, a project co-financed by European Commission Directorate-General for Communications Networks, Content and Technology as part of the Pilot Project – Media Literacy For All Grant agreement no LC-00644630. (The post was originally published on 23 April 2018)