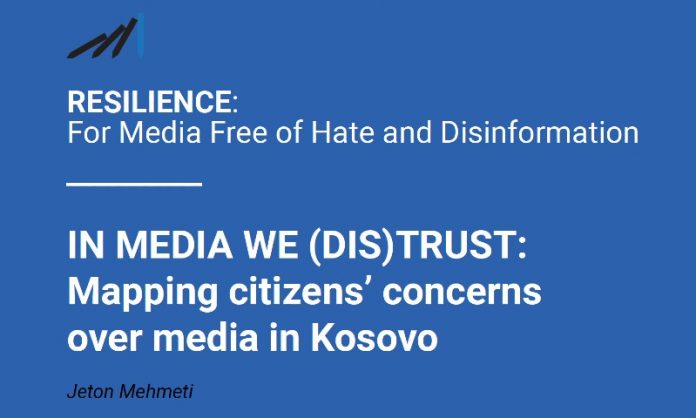 Complementing research on hate and propaganda models of media and communication and hate narratives, conducted earlier as part of SEENPM’s Resilience project, this report analyses media trust and media gender issues in Kosovo and offers a set of policy recommendations.

Results of the opinion poll conducted specifically for the purposes of this research show that Kosovo citizens are not only frequent users of media, but that they place a lot of trust in them, too. However, factors related to trust in the media are different. Publishing accurate and verified information is the main reason why Kosovo citizens trust certain media outlets while impartiality and fairness in reporting and having the latest news come second and third, respectively. Trusting the journalists who work for a specific outlet is another factor explaining why a significant number of citizens trust certain media. On the other hand, the main reasons for distrust are the perception that certain media are under political influence and that they are spreading disinformation. Spreading propaganda comes third. The interviewed media experts mention political debates in particular as a source of hate speech and disinformation, especially during election campaigns.

However, the majority of citizens in Kosovo believe that the media serves democracy and the public interest very well. Similarly, the impression that the media is free to collect and publish information on all relevant issues is pervasive in Kosovo. Investigative reports with information from whistleblowers have often caused political and policy changes. Pressure from the media and public reaction on social networks has often pushed the political elites to undertake immediate actions on human rights issues. However, the vast majority of citizens believe that the media are mainly controlled by political and business powers, something media experts disagree on. The latter suggest that it is primarily financial rather than political interests that make certain media apply self-censorship in their reporting.

On the other hand, the percentage of Kosovo citizens who perceive that the country’s media outlets are spreading disinformation is also quite high. Two thirds of citizens also believe that social networks spread hatred. The media professionals believe that the amount of fake news and hate speech in online media is very high. This makes media literacy programmes and training necessary.

This publication was produced within Resilience: Civil Society for Media Free of Hate and Disinformation, a regional project financially supported by the European Union and implemented in the Western Balkans and Turkey by a consortium of media development organizations led by SEENPM. It is part of a series of publications on media trust and gender issues based on research conducted in Albania, Bosnia and Herzegovina, Kosovo, Montenegro, North Macedonia, Serbia and Turkey (all publications are available on the SEENPM website).

Read the previous reports on Kosovo:

Hate Narratives in Online Media and Communication in Kosovo