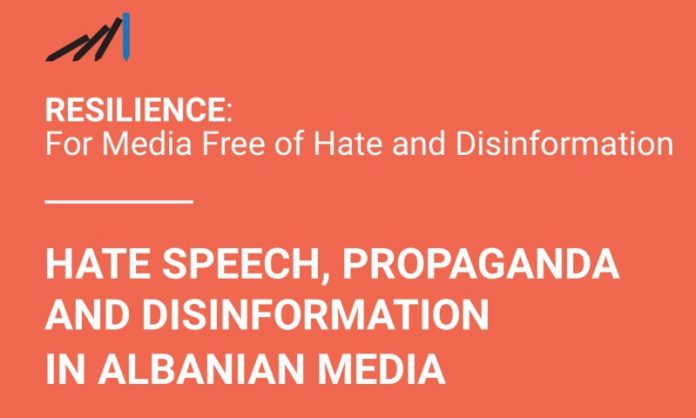 The purpose of this paper is to highlight the main models and elements that media in Albania manifest regarding hate speech, propaganda and disinformation and also to identify ways of countering these narratives. The research focuses mainly on online media, as they are identified as the main carriers of disinformation and hate speech, with a few exceptions, but traditional media are also present.

This publication was produced within  Resilience: Civil Society for Media Free of Hate and Disinformation, a regional project financially supported by the European Union and implemented in the Western Balkans and Turkey by a consortium of media development organizations led by SEENPM. It is part of a series of publications on the same general topic researched in Albania, Bosnia and Herzegovina, Kosovo, Montenegro, North Macedonia, Serbia and Turkey (all publications are available on the SEENPM website).

The research makes the following conclusions:

Models of hate speech or hate narratives are not obviously visible in Albanian media. Even though the media is rarely active in fighting hate speech in the country, it cannot be said that it is a source of hate speech or that it is actively promoting it. Politicians often push hate speech narratives, which the media publishes or reflects, provoking protest from some human rights organizations. This hate speech is mostly directed within the political sphere and towards personalities, as a reflection of the highly unethical public debate ongoing in the country for many years, but it can sometimes also affect other groups, based on ethnicity, sexual orientation, origin within the country, etc.

On the other hand, something online media are responsible for is the comments section on their websites, which often lack moderation of any kind. In most cases, these sections are an open invitation for readers to express all their hate, frustration, and opposition, not so much against the article, but the journalist, or even the persons the article is focused on. Seen as a highly problematic current trend of online media, this has been used as a justification for proposing legislation that has been considered as vague at best and restrictive at worst.

Contrary to hate speech narratives, which are rarely present, attempts to misinform and spread propaganda are a constant trend in the Albanian media. A very small category of existing online media is clearly under the influence of foreign countries. It engages in spreading their propaganda, putting their achievements and foreign policy in a very favourable light, or continually putting down their opponents, often engaging in the revision of history and referring to biased sources. This situation is also facilitated by the lack of requirement for online media to register and be transparent on their contacts, funding or policies.

While the furthering of foreign propaganda is confined to a limited number of media, the use of conspiracy theories and sensationalism to further media popularity, unfortunately, is not. Few online media outlets have escaped the trend of publishing conspiracy theories, which turned into a frenzy especially with the emergence of the coronavirus. Even television stations, which are supposed to have more filters and be more responsible about their content, have intensified this kind of coverage. Proponents of conspiracy theories are readily present in a few television stations in their main current affairs programmes, amplifying these theories and information, which leads to an increasingly greater influence on the public, especially given the lack of programmes or education on media literacy.

The degree of freedom in the online media does not correspond to an equal degree of professional responsibility on their part. In addition, even though television channels are more regulated and are under greater supervision from the regulatory authority, they also are far from engaging in professional self-inspection of their practices and self-regulating accordingly. It remains to be seen whether current self-regulation efforts in the country will impact the situation positively.