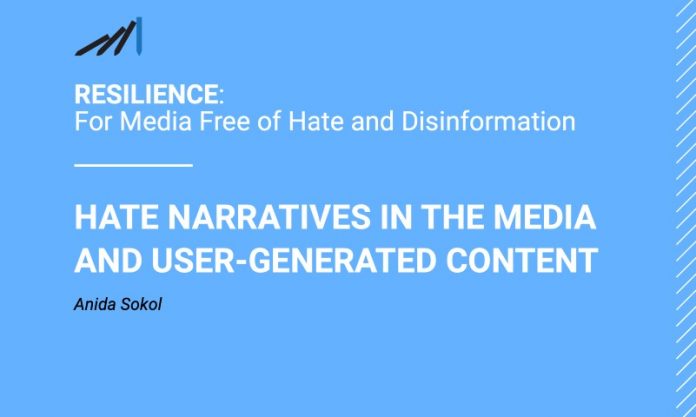 In this research, examples of hate narratives are analyzed to gain a better understanding of their origins, messages, and dissemination in Bosnia and Herzegovina after an overview and examples of the political-economic bases of hate, disinformation and propaganda models of media and communication in BiH were outlined in the previous report done within the framework of the same project.

The case studies in this new research demonstrate that the mainstream media and the leading politicians in the country are one of the primary sources and disseminators of hate narratives towards the selected target groups, particularly towards migrants and refugees and the political opposition. Hate narratives also stem from user-generated content, particularly towards journalists and minorities, in this case Jews.

Mostly, these hate narratives are not isolated instances of specific individuals but results of orchestrated campaigns that use different methods, such as biased reporting, disinformation and spread of fear. Hate narratives towards migrants and refugees, political opposition and journalists are mostly constructed based on portraying the targeted groups as threats to the country’s stability and targeting the emotions of security, fear and ethno-national sentiments. Such sentiments are very powerful in the country where fear of political instability and the endangerment of one’s own ethno-national group have constantly been present.

The efforts of civil society and (self)regulatory bodies against these practices have been limited. Voices that criticize hate narratives in the media are marginal and connected to civil society organizations, and there have not been any efforts from politicians, public figures or representatives of institutions to condemn and prevent such narratives. The efforts of online media to remove comments containing hate speech have been minimal, the research concludes.

This publication was produced within  Resilience: Civil Society for Media Free of Hate and Disinformation, a regional project financially supported by the European Union and implemented in the Western Balkans and Turkey by a consortium of media development organizations led by SEENPM. It is part of a series of publications on the same general topic focused on hate narratives researched in Albania, Bosnia and Herzegovina, Kosovo, Montenegro, North Macedonia, Serbia and Turkey (all publications are available on the SEENPM website).

Previous research series done within the same project, also in the Western Balkans and Turkey, tackles models of hate, disinformation and propaganda and their political and economic foundations. The series is available on the SEENPM website.