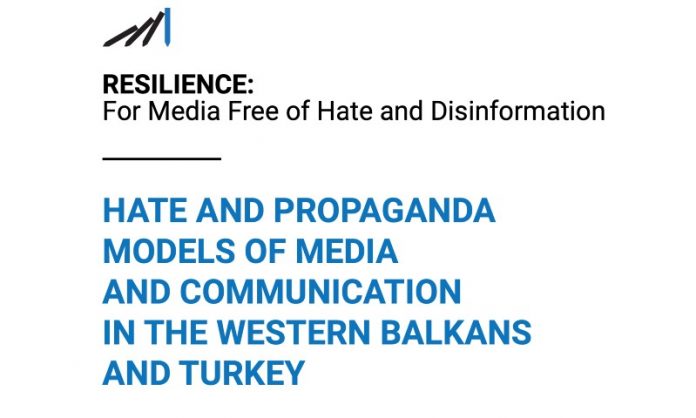 SEENPM presents a collection of research studies on hate and propaganda models of media and communication in the Western Balkans and Turkey. The collection includes a regional overview of findings.

The publication is the result of research conducted in 2020 in Albania, Bosnia and Herzegovina, Kosovo, Montenegro, North Macedonia, Serbia and Turkey within Resilience: Civil Society for Media Free of Hate and Disinformation, a regional project financially supported by the European Union and implemented by eight media development organizations coordinated by SEENPM.

The national studies in the collection are also available as separate publications in English and national languages (download links are below in this article).

Among other conclusions, the regional overview notes that there are numerous examples of disinformation, propaganda and hate models of media and communication in the region, some of them very powerful in terms of their political and financial background and influence on public opinion.

These hate and propaganda media and communication models are not marginal phenomena that have appeared accidentally, the overview argues and explains that in most of the countries of the region, they are significant elements of the media system and are established and maintained systematically to absorb public money and spend it on serving the political agendas of their patrons in the political parties that benefit from the radical polarization of the society.

The identified models and examples of propaganda, disinformation and hate function as propellers of the populist political narratives and income-acquiring tools. Both the political elites (including domestic and foreign political groups and governments) and the media owners have clear political and/or financial interests in disseminating hate, disinformation and propagandist content, the overview notes.

On the other hand, quality, highly professional media outlets that serve an important democratic function increasingly struggle for audience and revenues, and face pressures and a lack of sustainability, the overview argues.

This means that hate, disinformation and propaganda models are here to stay, and the countries of the region need to take decisive action against them and support media outlets that stand for professional values, the overview finds.