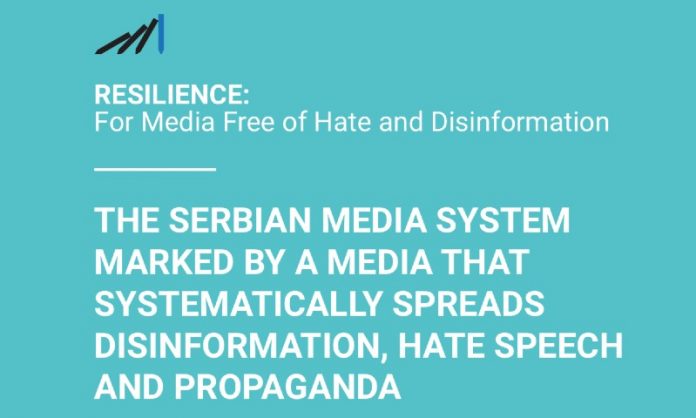 This research tried to establish how the financial and economic structure of the media market in Serbia affects the decline in the level of professional standards, the collapse of media autonomy and the misuse of disinformation and hate speech for propaganda purposes.

This publication was produced within  Resilience: Civil Society for Media Free of Hate and Disinformation, a regional project financially supported by the European Union and implemented in the Western Balkans and Turkey by a consortium of media development organizations led by SEENPM. It is part of a series of publications on the same general topic researched in Albania, Bosnia and Herzegovina, Kosovo, Montenegro, North Macedonia, Serbia and Turkey (all publications are available on the SEENPM website).

The research first presents the general framework of media dependence on centres of power, as well as the consequences of such dependence that can be seen in the content that these media outlets publish.

After that, different groups of media that can be described as creators and transmitters of hate speech, disinformation and propaganda are presented by chapters. The most influential and most widely circulated media in Serbia were taken into account. The outlets were grouped according to the frequency of unprofessional reporting. Each chapter also indicates the connection between the ownership structure of media outlets and centres of power for the presented group of media.

After the conclusion, recommendations were formulated for achieving greater transparency of the financial and economic structure of the media and for raising the level of the quality of content, based on the most frequently expressed requests of media professionals.

The conclusions of the research are the following:

Many years of attempts to ensure media autonomy and reporting in the public interest (starting with the adoption of the Law on Public Information and Media, the sale of state owned media to private owners, and the introduction of co-financing of media projects of public interest, to the establishment of regulatory and self-regulatory bodies – REM and the Press Council) would suggest that the country now has a formal basis for the work of professional media. However, inadequate sanctioning of unprofessional media practices, as well as the frequent abuse of the mechanism for co-financing of media projects, which results in co-financing of media that systematically publish disinformation, hate speech and propaganda, indicate that the formal legal framework is not functional.

Civil society in Serbia has mechanisms and platforms that monitor and analyze the work and funding of the media, such as the research portals Fakenews tragač, Raskrikavanje, BIRODI, CINS and BIRN. The self-regulatory body of the Press Council is also active. They all continuously deconstruct media manipulations and disinformation and point out violations of laws and codes. However, their work is subject to insults and threats from high-ranking state officials, who even obstruct their work with numerous lawsuits.

The citizens of Serbia are primarily presented with media content in which topics of public interest are neglected, i.e. these topics are dealt with by media outlets of limited reach, whose reports are neglected or attacked by outlets  with national reach. At the same time, citizens are systematically provided with content supportive of the government, spreads disinformation and incites hatred towards dissidents or neighbouring nations. In that way, the general public is prevented from accessing credible information and developing critical awareness. In most media outlets, which publish disinformation, research has shown a close connection between media owners and governing structures. These indicators point to the possibility that the sustention and spread of such a media model in Serbia is in the interest of the current governing party, in order to keep citizens in a constant state of existential concern through the media, with daily encouragement of polarization, hatred and intolerance. Through the most popular television channels and newspapers, citizens are deceived by the media being silent about issues and problems of public interest, along with simultaneous hate, disinformation and propaganda attacks on anyone who tries to point to any of the problems or abuses. The state uses the money of its citizens to support the media that deceive those same citizens, which is an obvious sign of a non-functioning democratic media system. Such a media policy is not in the interest of the citizens. Therefore, it is hard to avoid the conclusion that the goal of such a policy is to maintain power, control public resources and public opinion.

Deception with constant encouragement of hatred and intolerance ultimately leads to citizen passivity and diminished participation in public life. As a result, the work of public institutions remains non-transparent.