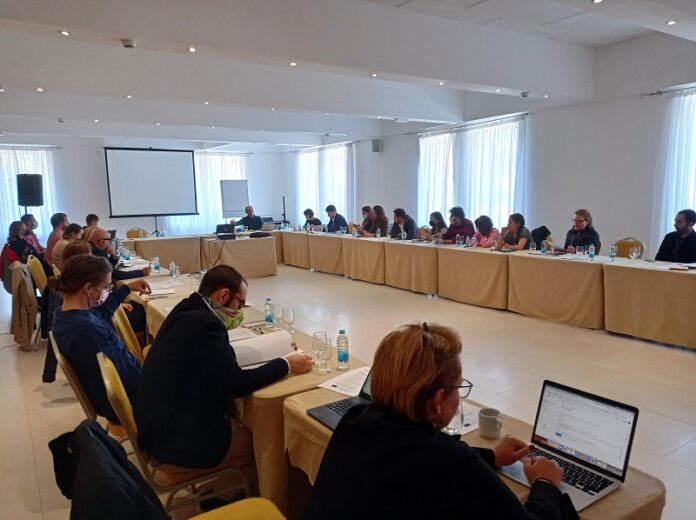 Editors and representatives of media CSOs from Albania, Bosnia and Herzegovina, Kosovo, Montenegro, North Macedonia, Serbia and Turkey gathered in Njivice, Montenegro to discuss the role of editors in restoring media trust.

The meeting, organized within the Resilience project on 13-16 October, provided a platform for media professionals to exchange experiences on sustaining media operations that promote high-quality journalism.

Countering the spread of online disinformation, constructive journalism, cross-border collaboration and hate speech were among the topics discussed by participants.

Stefan Janjić, the editor-in-chief at Fake News Tragač from Serbia and one of the speakers, explained that the process of countering disinformation in this country usually required countering hate speech as well.

“Based on our archive of our analysis we have 42 percent of false content that contains some kind of hate speech or toxic narratives. In the first place about neighboring nations – absolute champions are Albanians, then Croatia, Bosnia and Herzegovina and we have migrants and LGBT+ population”, explained Janjić.

“It’s not about learning the basics and then just upgrading them. Because hate speech and discrimination always find new ways of surviving which are very much different from the previous ones. So, you learn it throughout your career – all the time”, said Janeski.

During the next phase of the Resilience project, editors and journalists from Albania, Bosnia and Herzegovina, Kosovo, Montenegro, North Macedonia, Serbia and Turkey will get the opportunity to participate in the project and produce cross-border stories. Importance of the collaboration and cross-border reporting was one the topics presented at Editors’ Forum by Aleksandra Sobczak, the deputy editor in chief of Gazeta Wyborcza from Poland and one of the keynote speakers who shared experiences from the EU. She explains that, when it comes to Gazeta Wyborcza, there were many challenges but also positive effects resulting from the collaboration with other media outlets.

“I must admit that we had a lot of doubts from all sides in this participation, but after the first experiment we just realized that we are reaching a huge audience thanks to that. So, this was worth doing, not only because of the democratic issues – to fight propaganda and disinformation, but our business also grew thanks to those cooperations”, said Sobczak.

During the Editors’ Forum participants watched three documentaries about the role of the media in shaping our reality: “Patka”, “Collective” and “Junk Folder”.