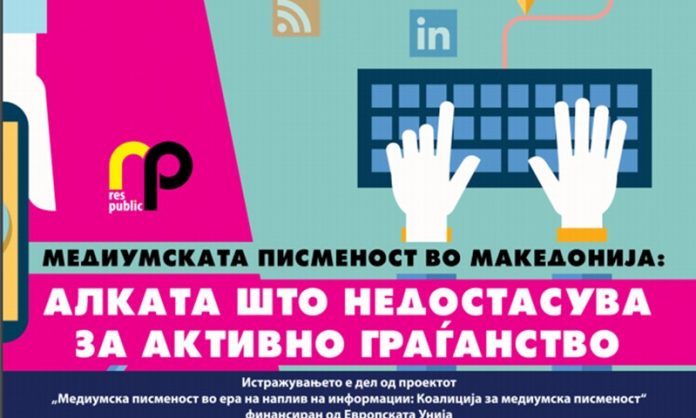 The conference “Media Literacy as a prerequisite for active citizenship” was organized by the School of Journalism and Public Relations in partnership with the Media Diversity Institute and “Nova Makedonija” daily. The event is part of the “Media Literacy in the Age of News Overabundance: Macedonian Coalition of Media and Information Literacy” project, supported by the European Union.

At the conference representatives of relevant institutions, non-governmental sector, education sector and the media, raised numerous questions about Media and Information literacy (MIL) in Macedonia, as well as about the roles of different stakeholders. One of the key conclusions was that MIL has to be integrated in the school curriculum.

“The media also should educate and interact with the audience while active civil society has a role to promote concept of active citizenship, be a source of information for citizens and implement non formal education programmes in the sphere of MIL,” concluded participants at the conference in Skopje.

The Media Diversity Institute representative Ivana Jelaca advocated for the early introduction of MIL at primary schools reminding that the youth is often categorised as the vulnerable audience. “Researches show that adults are almost equally non critical towards online content and that non-formal education programmes are important for all age groups,” Jelaca said.

MDI representative added that civil society has a crucial role in providing information and that media have to be recognised as a tool for CSOs in sending their message to a wider audience, but that CSOs also should have been seen as a valuable source of information and expertise to the media. “In that way,” Jelaca believes, “we are contributing to the media plurality”.

Aleksandra Temenugova from the School of Journalism and Public Relations announced the call for project proposals for the joint projects of CSOs and the media, which have an objective to raise awareness of citizens and promote MIL as a way to articulate issues of public interest and to actively participate.

The conference was attended by representative of EU delegation in Macedonia Jaromir Levicek, who said that “EU considers MIL as intrinsic to a healthy democracy”. “Being media literate allows people to be participants of democratic processes”, he added saying that  “we are not only passive recipients but creators and media sources”.

The information was originally published by Media Diversity Institute.