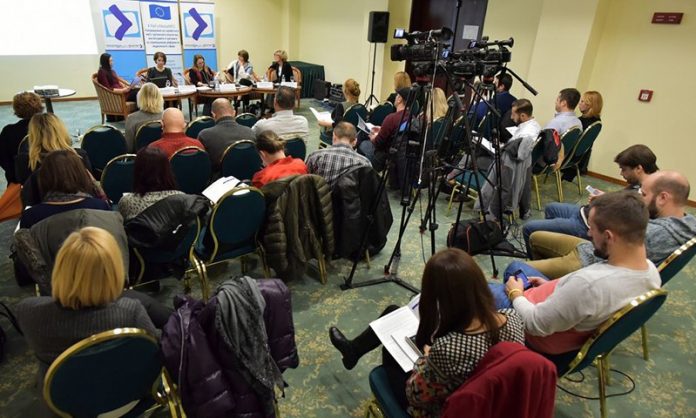 The main recommendations from the comparative analysis of the Programming Councils of the public service broadcasters of Macedonia, Croatia and Slovenia.

Current and former members of the Programming Councils of the Public Service Broadcasters in Macedonia, Slovenia and Croatia participated in the event as speakers.

Snezhana Klincharova, the President of the MRT Programming Council, noted that by abolishing the broadcasting fee, which is contrary to the recommendations of the European Broadcasting Union (EBU), the independence of MRT could be at stake.

According to her, with the new manner of 0.5% funding allocated from the state budget for 2017, there would be less funding for this broadcasting-house in comparison to 2016, which would also be reflected on the programme quality.

In addition, Klincharova highlighted the problem arising from the agreement between the political parties “Przhino 2”, by which the second channel of MTV should be completely transformed into an Albanian language programming service, the launching of which, according to the analysis, would require EUR 5 million.

For Brankica Petković, a representative from the RTV Slovenia Programming Council, “the lack of transparency in the work of this body is absolutely unacceptable”.

According to her, it is very important for the president of this body to be a person with integrity, high ethical and moral values ​​and high intellectual potential.

According to the experience in both Slovenia and Croatia, the abolition of the broadcasting fee and the financing of the public service broadcaster from the state budget is not a good solution.

The participant from Croatia, Mirjana Rakić, who is the former President of the Croatian regulatory body, as well as former director and editor of HRT, believes that “a connection should be established between the citizens and the public service broadcaster”, so that the citizens see the PSB as their own, and consequently have confidence in it and thus protect it.

She informed that HRT’s Programming Council has no influence on the programme, i.e. they can only debate, and the Ombudsman only has an advisory role.

Both Petković and Rakić ​​agreed that the decision where the Director General is elected by the Assembly, as is the case in Croatia, was not a good model that met European standards.

The analysis and the debate are part of the project “#ReFormMedia – Improving Cooperation among Civil Society Organizations, Institutions and Citizens for Conducting Reforms in the Media Sphere”, implemented by the Macedonian Institute for Media and the Peace Institute from Ljubljana, and financed by the European Union.

The article is a contribution by the Macedonian Institute for Media, a SEENPM member organization.