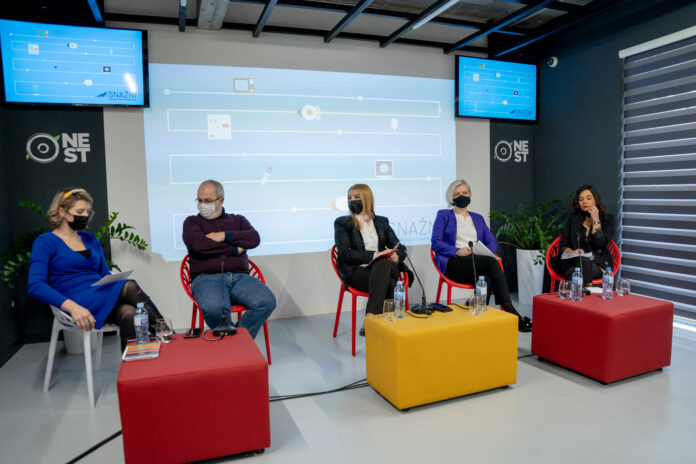 On the occasion of Montenegrin Journalists day, Montenegro Media Institute has organized the debate “We have no time for hate – how to improve regulation and self-regulation in Montenegro to prevent the spread of hate speech and disinformation”.

The debate was organized on the 21st of January at the NEST Coworking space and gathered 29 guests from media, CSOs, institutions. The discussion was led by Aneta Spaić (Dean of the Faculty of Law), Sunčica Bakić (Representative of the Agency for Electronic Media), Nerma Dobradžic (Deputy Protector of Human Rights and Freedoms), Mladen Zadrima (The editor-in-chief of RTV Cetinje), and moderated by Milica Bogdanović, program coordinator of Montenegro Media Institute.

During the event, MMI’s team presented their last factsheet, “National Regulatory and Self-regulatory Framework for Hate Speech and Disinformation”, produced through the EU-funded project ”Resilience – For Media without Hate and Disinformation”.  Additionally, European standards and initiatives to prevent hate speech and disinformation in EU countries were presented by media law expert Peter Noorlander from Global Rights Hub.

The debate was attended via Facebook and the ZOOM platform by 37 participants. The participants in the discussion pointed out that the enormous social damage is caused by hate speech in public space and called for more proactive action. Emphasized was the responsibility of politicians who, with “inflammatory” rhetoric, contribute to the growth of offensive and hate speech in public space.

The media law expert Peter Noorlander presented the EU’s practice and pointed out that there are more and more complaints about member states not doing enough to suppress the hate speech. Noorlender also drew attention to the need for continuous education of citizens through media literacy.